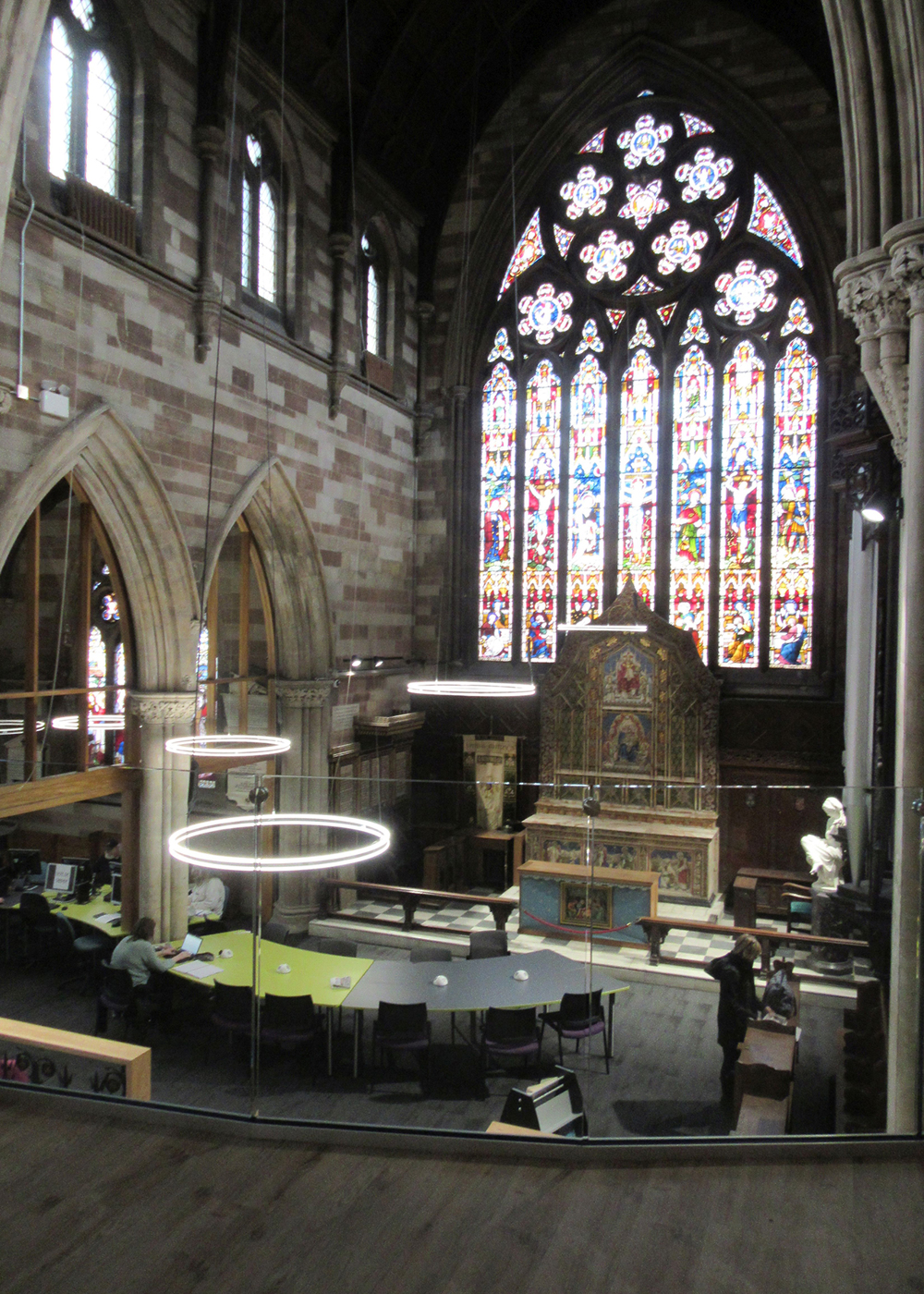 This is what churches used to be used for - meeting places, community places, places where people would gather to talk. That’s what the library brings now.

Photos courtesy of Staffordshire County Council and Opening the Book

Opening the Book first visited St Mary’s Church, Lichfield, in 2016 to consider the feasibility of the library being part of a larger refurbishment project.  The space was not, on first impression, very promising – it was dark, with low ceilings, lots of barriers and huge pillars which had been truncated by the extra floor added into the nave.  But then we entered the chapel area with its magnificent stained glass window and suddenly the building opened up.  This space really was beautiful – now the question was, could it be a library?  How could we make the low-ceilinged area more attractive? And how could we best use the chapel, given that listed features such as pews and railings must remain, and anything in front of the main altar space must be moveable to allow the annual mayor-making ceremony to take place?

The commitment of everyone involved to breathe new life into this building carried us through the next two years of planning and overcoming obstacles. The library team, led by Catherine Mann, Libraries and Arts Manager, saw the potential from the outset, St Mary’s Guild provided the vision for a new cultural space and local architects, BHB, solved the problems of internal heights and access with a wonderful walkway between the nave and the chapel that looks as if it’s always been part of the building fabric.

The result is one of the most successful projects we have ever been involved in. In the 4 months since opening in January 2019, visitors have doubled from 50,000 in the old library to 100,000 in the new one and new members have also doubled. Most pleasing of all to staff who do a great job of making the books look good, issues are up by 18% - and this in a footprint considerably smaller than the previous library.

The challenge was to create a contemporary library offer in a historic space.  We started with respect for the building and worked closely with Simon Keen, the architect, to maximise the impact of pillars and restored stonework.  Curved shelving and desking matched the new curved walkway and created softer and more intimate discoveries within the grand exterior envelope.  Computers, large screens, access to plug in your own device and a children’s digitable bring a modern approach to IT.

The colour scheme was developed on site to complement the true colours of the restored stonework as they were gradually revealed. The yellow and grey has a calming effect with pops of brighter colour on the seating. The children’s area is a lighter blue and oak with the clever use of our Big Book Storytime Feature making the seating, play and performance area feel generous even in a tight space.  A detail of the metal decorative hinge was picked up as a motif on the bookcase signage headers and enlarged as an attractive manifestation on the revolving entrance doors instead of the standard two rows of dots.

Alongside the library offer there is also a History Access Point, Tourist Information Centre and St Mary’s Gallery & Performance space on the upper floor. The views up towards and down from the new glazed parapet are breathtaking.  It is clear from the months following the opening that not only the magnificent church has been rescued, the whole Market Square feels revitalised with this new presence.

I found it really hard to imagine how a church could become an accessible and attractive library space. However, Opening the Book filled me with confidence that this was achievable and you were absolutely right!  A huge thank you from me for all of the imagination and creativity which you have bought to this project.  We have created a unique library with an amazing atmosphere. 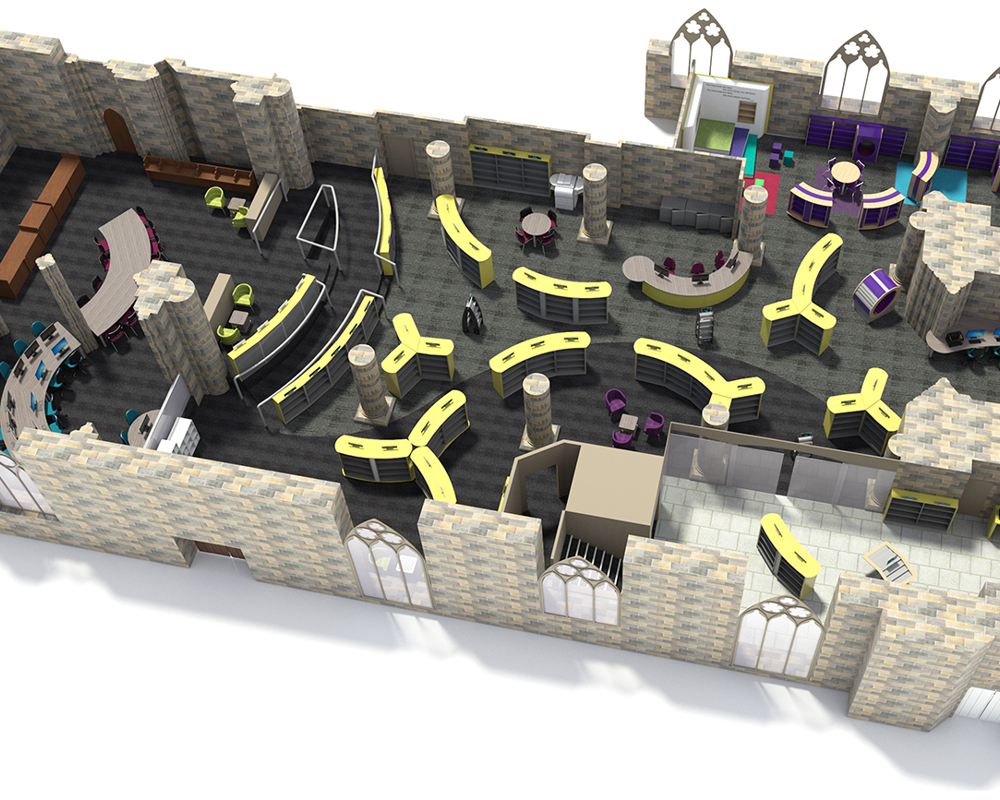 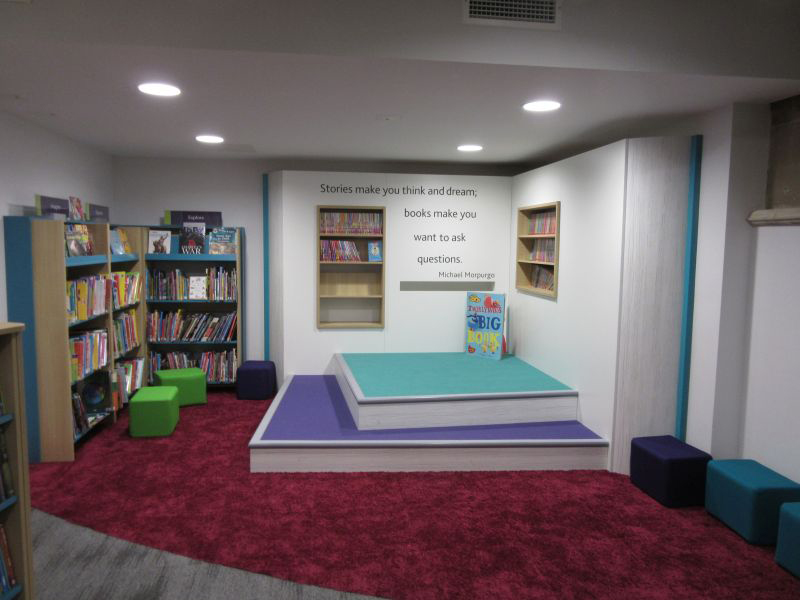 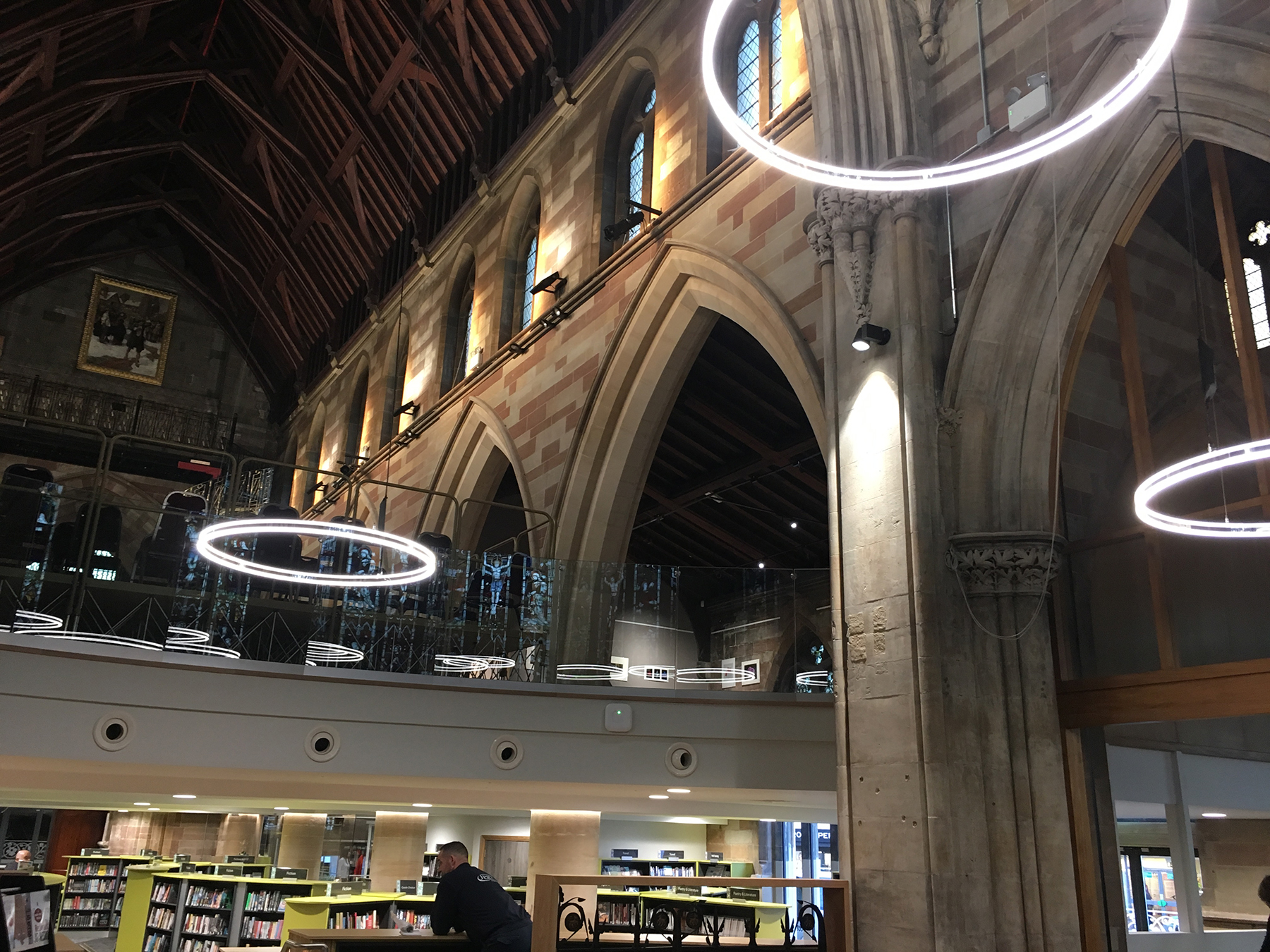 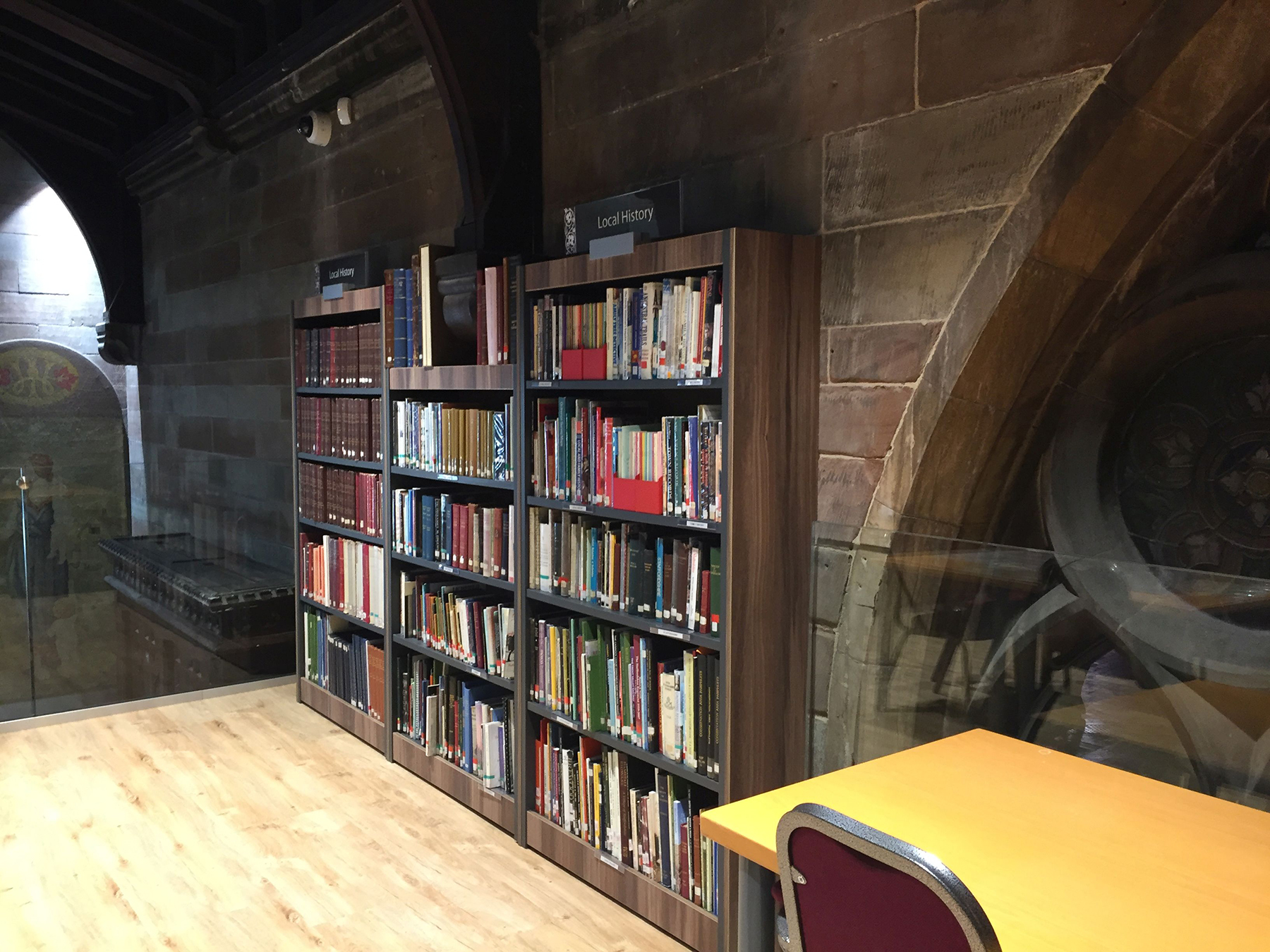 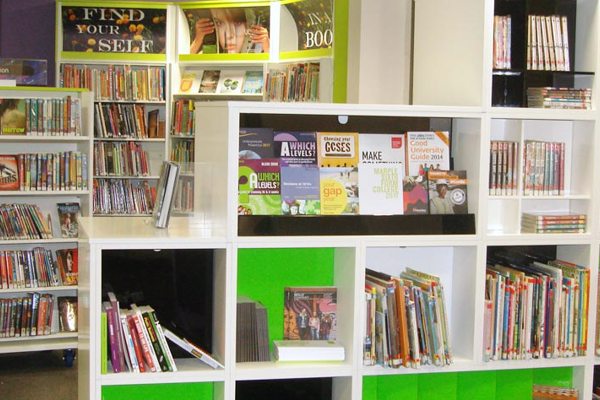 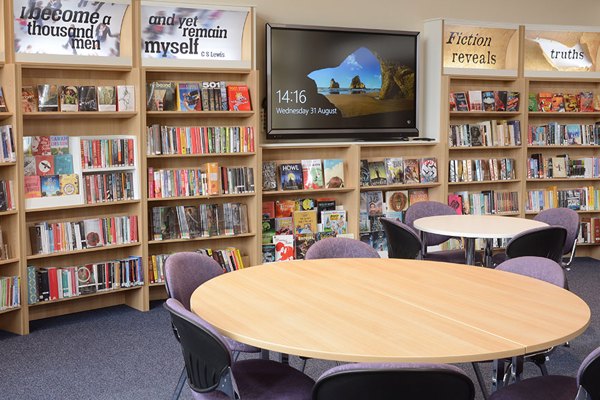 Transforming the old chapel in a 19th century school into a contemporary, practical library was an exciting challenge for our design team this summer. The brief was to create a highly flexible layout which would accommodate all the usual activities required of the hard-working hub of the school, plus the ability to easily transform the space for large group events. 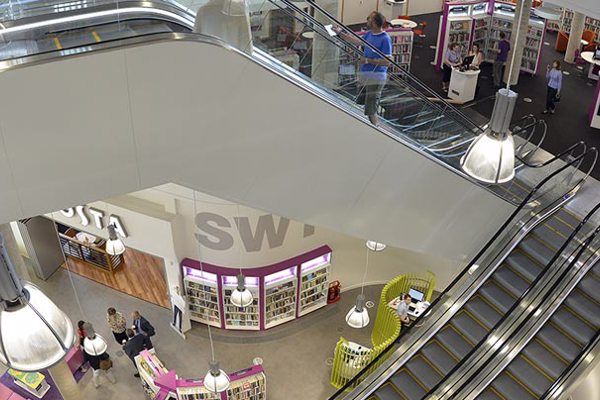 A dramatic building, a new landscaped development and a council ambitious to change its relationship with its customers – what an opportunity! Opening the Book worked with libraries, Customer Services, architects and contractors to create a completely new kind of experience for Telford residents, whether they come for the library’s new offers or to claim benefits. 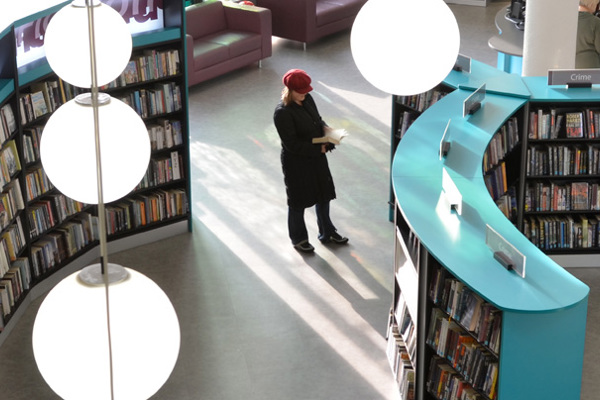 A hard-working library with pressures on space was transformed through a major rethink. Capacities were increased through better space planning across several floors but the library feels more open and light because of the skilful layout in relation to the architecture. Opening the Book worked closely with senior managers to plan new approaches to staffing the space. 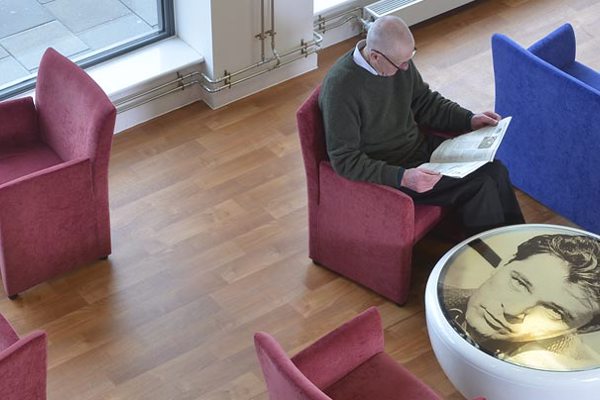 A much-loved but derelict cinema was reclaimed and extended as the Library and Customer Services Centre. Opening the Book brought contemporary style mixed with a celebration of cinematic heritage to deliver immediate appeal in the high street location. Upstairs we zoned the space for noisy and quiet activities and designed in a film-projection space for an audience of up to 60. 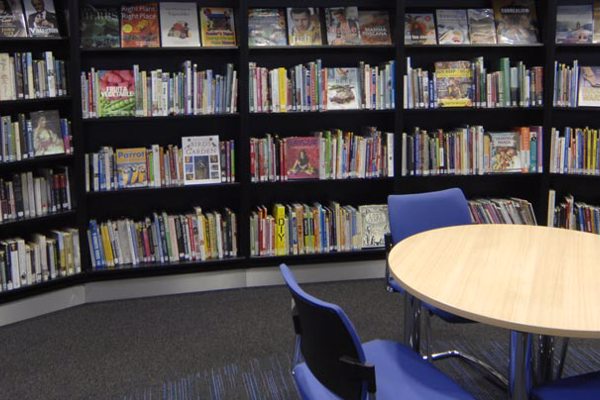 This market town had campaigned for a new library for 20 years so expectations were high. Residents, councillors and staff all supported our proposal to move to a discovery layout and retail-style presentation in the new library. The results in terms of increased membership, visits and loans have been outstanding. 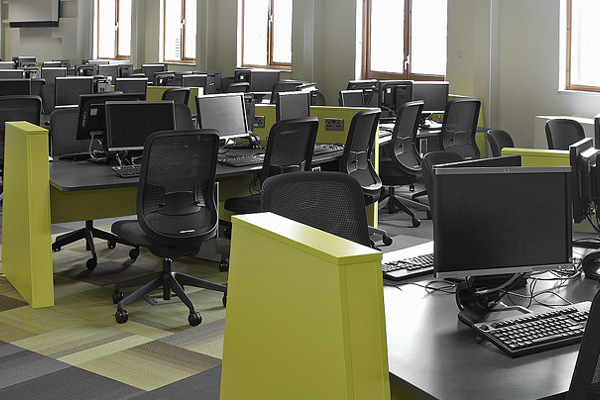 The 4th floor of Boots has always been the most heavily used computer space in the university – and it showed. Opening the Book used colour and style to create a more pleasant study environment while actually increasing the number of study spaces available. Our unique desk design added student access to power sockets alongside fixed pcs to futureproof.